For a lot of internet users, Virtual Private Networks (VPN) still raise many questions. Who are the people using this tool? What are their reasons behind it? Let’s look at what VPN users themselves tell us.

The ever-growing interest in VPNs globally

Who searches the abbreviation vpn the most? The search engine optimization tool Ahrefs points at 5.7M average Google searches per month with the US at the top. This means that people search for a “vpn” around 6 million times a month on average. 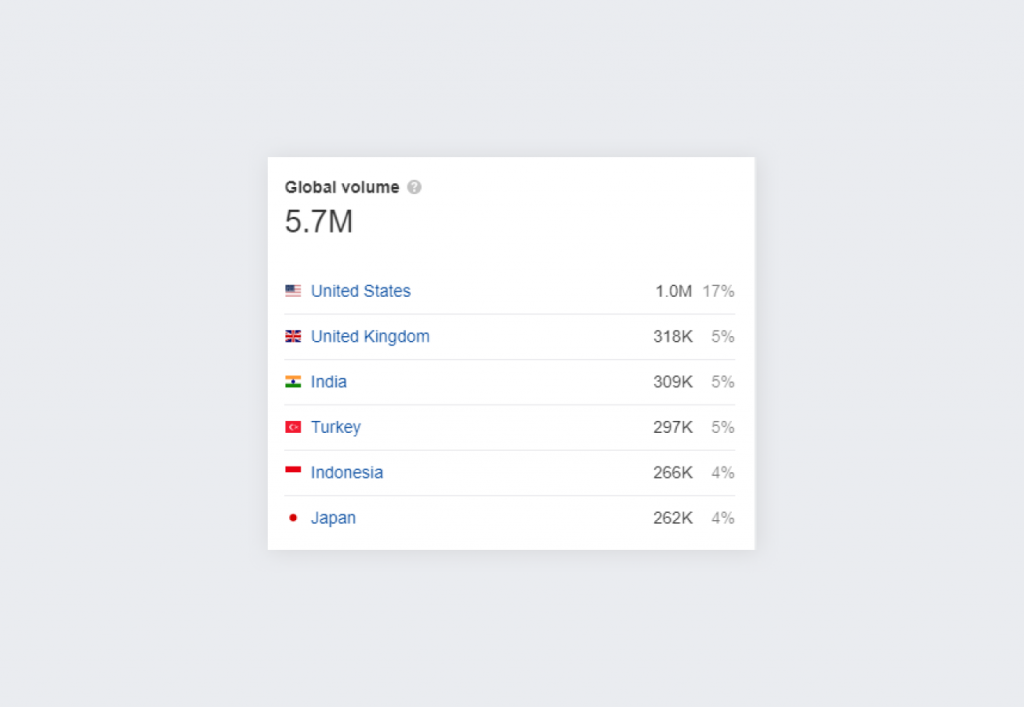 Note that the numbers in the screenshot above are estimates. It’s quite impossible to measure the exact number of times someone searched something online.

We could also take a look at how Google Trends portrays interest in VPNs. 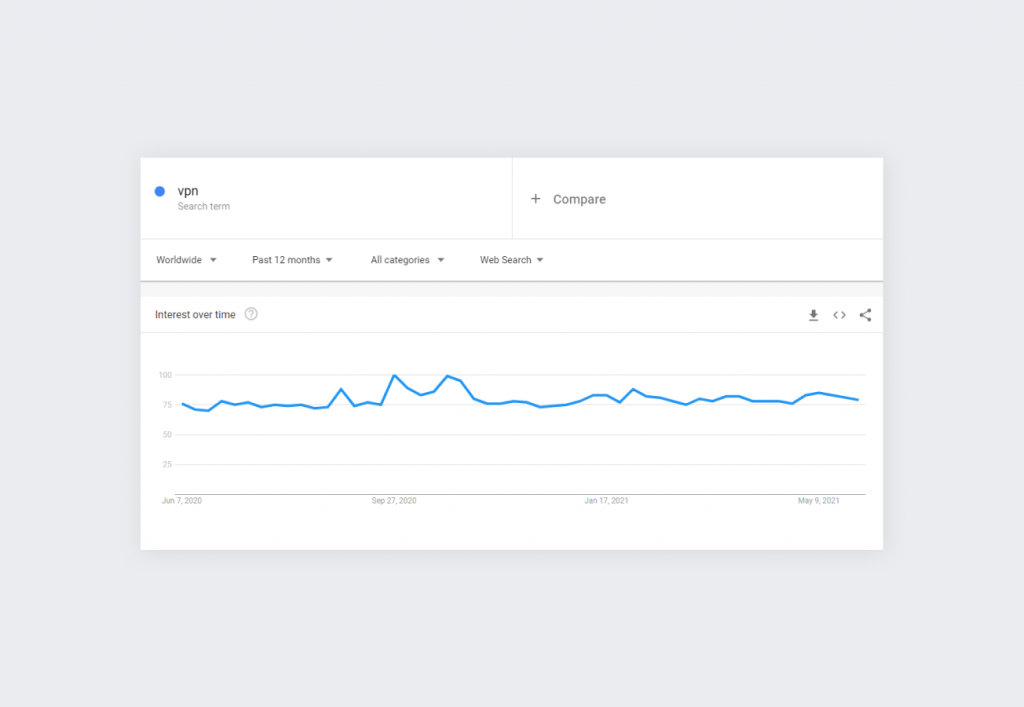 Over the past year, we can see the interest fluctuating from around 75 to 100. The interest in VPNs peaked twice in 2020 and then stabilized in 2021. However, the most recent average is slightly higher than the year before. Fluctuations aside, this shows that the interest is increasing over time.

The interest in VPNs is unsurprisingly very closely related to VPN usage. Exploring trends tells us a lot about where VPNs are the most popular. 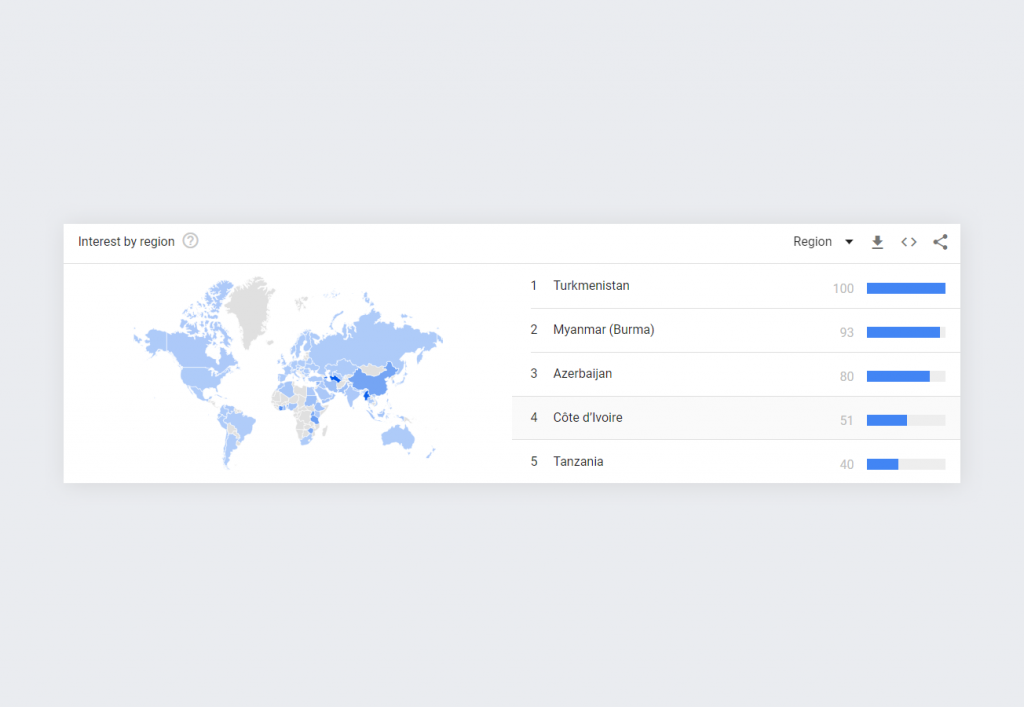 Just by looking at the top 5 countries interested in VPNs, it’d be fair to say that the interest stems from strict government censorship. It’s also closely tied with internet freedom across the world, especially with internet ban trends continuing in place like Uganda..

Internet freedom across the world – is it on the decline?

To be concise, yes. Internet freedom  has been declining globally for the last ten years. And the 2020 pandemic didn’t help – quite the opposite, in fact.

Since the pandemic started in China (the country has ranked last in the Freedom of the Net’s analysis for the sixth consecutive year), there was a lot of disinformation and censorship that added to the rapid spread of the virus.

It hasn’t been easy in the US as well. Internet freedom in the United States has been declining for the last four years. In the past year and a half, it dropped by one index point. Growing social media surveillance, harassment, and even criminal charges for online posts and tweets don’t really sound like progress.

The country that remains on top with 95 index points out of 100 is Iceland. Meanwhile, China’s rigid censorship, website blocks, and the promotion of disinformation during Covid-19 put it comfortably at 10 index points.

When the pandemic hit the world in March 2020, people started flocking to VPNs for security and privacy while working from home, as well as for more entertainment in a time when everyone found themselves having more free time.

And the numbers are pretty remarkable.

Who are VPN users?

Let’s look at some demographics to get a better picture of those who use VPNs.

The map below shows the percentage of VPN users in different regions.

You can see pretty clear tendencies, but I’ll talk more about it in the following section.

While the United States and the United Kingdom are both well-established markets for VPNs, they’re not the world’s biggest. So who is?

Remember what I briefly touched on in the section about VPN interest and government censorship? The correlation between internet shutdowns and interest in VPNs shows up when looking at VPN usage statistics as well.

It’s hardly a surprise that those who have grown up with technology are first in line when it comes to digital privacy protection and security tools.

How often do VPN users open the app and click Connect? The findings suggest that almost half of those who have a VPN use it at least once a week, and only 10% claim they rarely find a use for it.

Why do so many VPN users opt-out of using a VPN everyday? That’s because a big portion of people need it to protect themselves on public Wi-Fi or get access to certain websites, streaming platforms – and that’s not something most of us do religiously every single day.

Is a VPN more popular among desktop or mobile users? Well, apparently, there’s no significant distinction between the two, even though mobile VPNs appear to be slightly more popular.

While it seems that VPNs still interest male audiences more, internet users who identify themselves as female are increasingly more interested in VPNs as well.

What reasons motivate people to get a VPN?

Out of all the reasons to get a VPN, which one comes on top? Since VPNs are well-established in the US and UK markets, let’s explore why people use them.

The statistics indicate that around half of VPN users are concerned with privacy and security online, regardless of age or gender.

However, it’s a bit troubling to see that 44% of those surveyed said they use a VPN for anonymous browsing when anonymity online is almost impossible (yes, even with a VPN).

Now that we’ve looked at the reasons behind getting a VPN, let’s see how people choose their VPN providers.

What do people look for in a VPN?

What features do people prioritize when choosing their privacy protection tool?

Fair to say that people expect their VPN to perform well with no connection or speed issues. What users also appreciate is ease-of-use, which makes sense since VPN technology isn’t simple in itself. Boiling it down to understandable language and a simple interface goes a long way.

It’s worth noting that only about a third of VPN users care about advanced security features or a number of server locations. It might suggest that people aren’t really aware of all the useful features that VPNs have. Or perhaps those who use VPNs don’t have very high-security demands in general.

Price is definitely a factor to VPN users, but 42% is lower than most people would probably expect. It appears that cybersecurity and general privacy is becoming more critical in today’s climate.

Speaking of price, let’s jump to the next section.

Well, yes. Most VPN users choose free services even though studies have shown that such apps often contain malware, mostly due to advertisements. Since free VPN apps rely heavily on ad revenue, they put people who use those apps in danger.

Free VPN apps also have shaky privacy policies. It’s no secret that most people don’t read them thoroughly, so taking advantage of it is quite easy for free apps. That’s how they get away with selling your data to third parties.

Generally, free VPNs seem to do the opposite of what a VPN should be doing.

The interest in VPNs is growing globally.

Countries with strict censorship laws and frequent internet shutdowns have the biggest percentage of VPN users.

VPN usage surged when the Covid-19 pandemic hit the world.

As a reason for using a VPN, about half of the correspondents say they use it for general privacy, anonymous browsing, and to stay safe on public Wi-Fi.

When shopping for a VPN, people care about connection stability and speed more than they do about advanced security features.

Wait no more; get a VPN and protect yourself online

Start today and get a 30-day money-back guarantee

Home server: Why you need one and how to set it up

Proxy server: What is it and do you need one?

Data hoarding: What it is and how it affects your digital life