Due to government decisions and other factors, geo-blocking is a situation that affects everyone. The message that exclaims The content is not available in your country can pop up unexpectedly. What do you do? How do you bypass geo-blocking? I’ll talk all about it in this post.

There are four easy ways to bypass geo-blocking

I’ll explain these methods in detail later in the article, but first, let’s explore the concept of geo-blocking.

Geo-blocking is a way of limiting access to certain websites based on geographical location. It’s most prevalent in the video streaming industry, but it’s also used as a means to restrict access to social media, dating sites, news sites, etc.

Speaking of streaming, it mostly boils down to licensing and copyright issues. Let’s take Netflix as an example. Why does every country have a different Netflix library? Certainly not because they can, but because they have to.

Even though there are increasingly more originals on Netflix, most movies and TV shows there belong to other movie and television studios. Thus, Netflix has to play by their rules.

When a Hollywood movie studio invests millions of dollars into making a movie, they understandably want to make that money back and then earn a profit. So, they waste no time enforcing strict copyright laws to earn as much money as they possibly can.

Apart from streaming geo-blocks, there’s also an issue of censorship. Although this problem might seem like something only imposed by oppressive governments, the scope of it has been increasing alarmingly in many democratic countries. According to researchers from the University of Cambridge, more than 60 countries engage in some form of state-sponsored censorship.

Of course, there are other unfortunate reasons for geo-restrictions; for example, a shopping website doesn’t have the means to ship its products to a specific country.

Generally, the main reasons for geo-blocking can be summed up in two bullet points:

But how do studios and governments impose geo-blocking? For that, let’s jump to the next section.

How does geo-blocking work?

Geo-blocking works by tracking your Internet Protocol (IP) address. In simple terms, your IP address is like your real home address – it gives away your location.

This is how it goes:

Geo-blocking also applies when traveling. Meaning, if you are an American visiting France, you will only access the content available in France.

Or, if you’re in Iran, for example, you can’t use Airbnb (one of the most popular trip and accommodation planning apps) due to the US sanction laws. 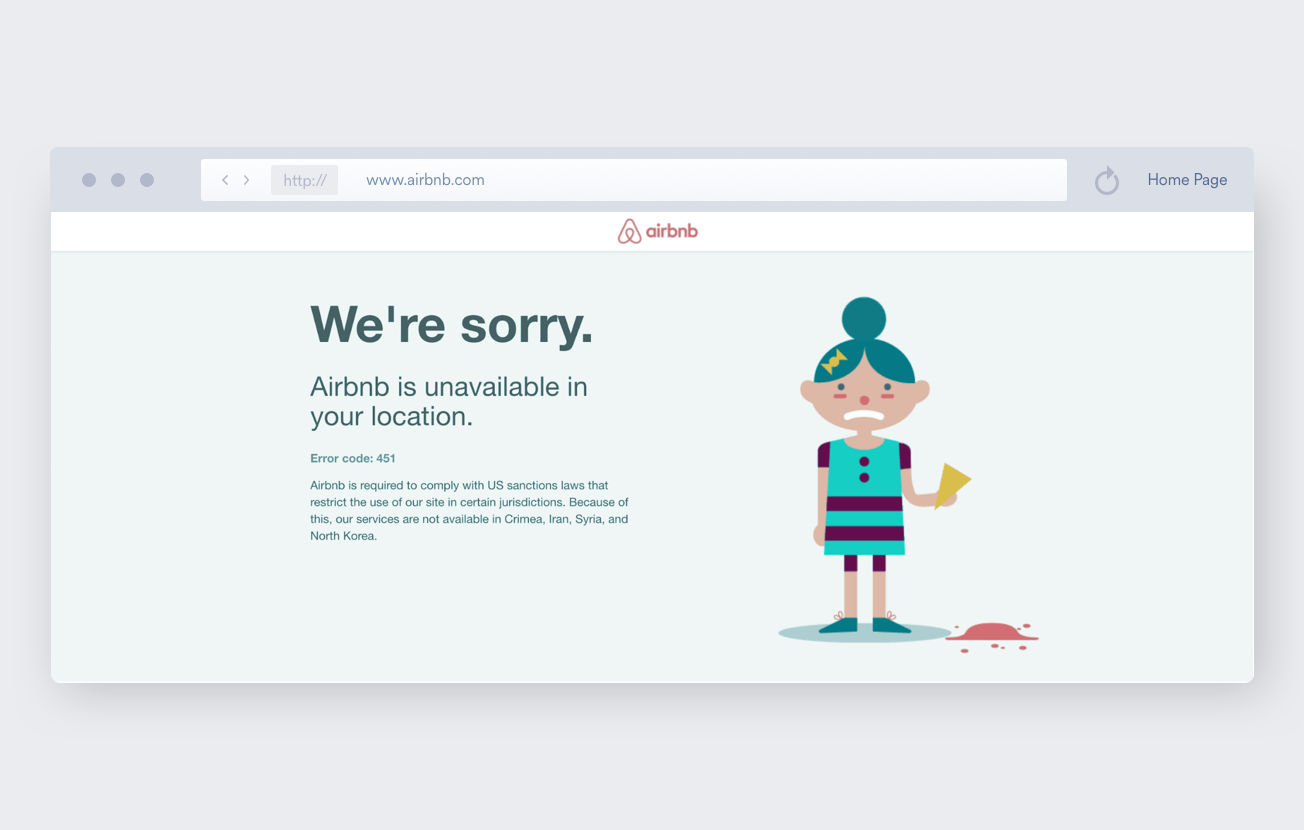 Despite attempts at geo-blocking, there are ways to access the free and open internet. What are they, and what do you need to do? Read on.

How to bypass geo-blocking? 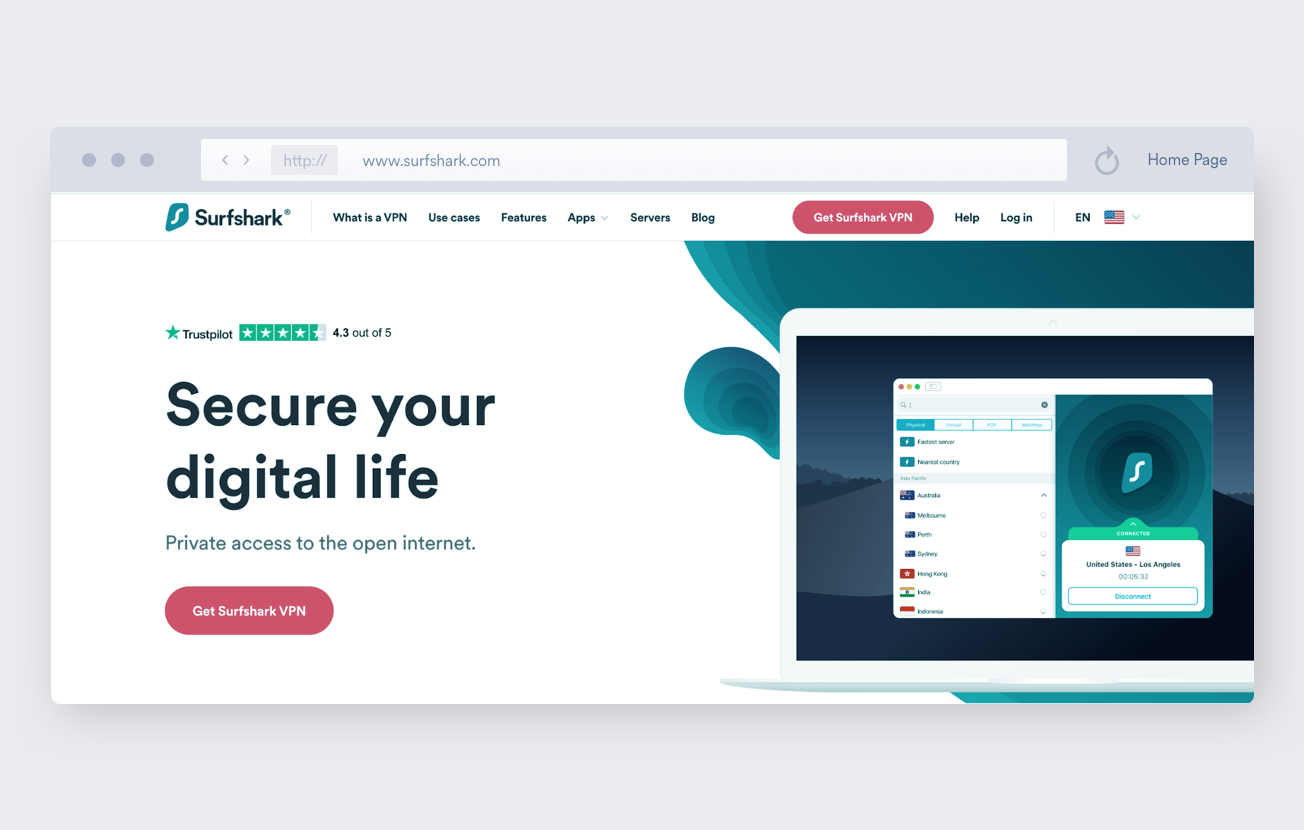 Getting a VPN is easy and usually inexpensive. Most VPNs are compatible with iOS, Android, macOS, and Windows operating systems. For example, Surfshark also allows you to download the VPN on Chrome and Firefox, Linux, FireTV, AppleTV (+ other smart TVs), Xbox, and Playstation.

How to get started with a VPN?

Internet service providers (ISPs) in around 30 countries block access to The Pirate Bay. The UK, Germany, Italy, Argentina, Malaysia, among others, experience trouble when trying to connect to the biggest torrenting website. And that’s just one of many examples of ISPs or the government restricting internet access.

I could sit here all day listing what’s blocked, where and why, but one thing is clear: A VPN helps to bypass government-induced censorship. In this case, a VPN not only plays a role in reducing internet censorship, but it also fully secures your data from the prying eyes.

Do you know that your location can affect the price you pay for a product or a service? It’s called price discrimination. It’s widely practiced in many industries, but most commonly noticeable when looking for plane tickets, hotel bookings, and other travel essentials.

Fluctuating plane ticket prices can increase due to the website “remembering” that you’ve visited this exact deal before. It’s called cookies, and it’s often used in targeted advertising.

When you use a VPN, the website “thinks” you’re a different person. That makes the application of targeted pricing tactics more difficult.

Next time you’re planning a trip and looking for plane tickets, try playing around with a VPN. Change locations (experiment with countries across different continents) and see how the price fluctuates.

Other ways to bypass geo-restrictions

Although a VPN is the most effective and advanced way to unlock geo-blocked websites, several other options might work in some specific cases.

A proxy server stands in between you and the website you’re trying to reach, acting as some sort of a “middleman” (or a separate computer). Since every device that’s connecting to the internet has its IP address, so does a Proxy server. When you connect to the internet through a proxy, it grants you a different IP address before redirecting you to the website you’re trying to access.

Proxies can be successful when you want to get around website blocks, but they’re not as secure and effective as a VPN. A VPN protects all the traffic that goes through your device. Meanwhile, a proxy only works within the borders of a specific website or application.

Tor is another way to bypass geo-restrictions. It works like any other browser – Chrome, Safari, etc. You can open all the regular websites, as well as special .onion sites that are only available on the Tor network.

For example, The New York Times has an .onion site, meaning that if you want to read the newspaper anonymously, you can do that through Tor.

However, Tor doesn’t offer security that a VPN does. Your ISP can detect that you’re using Tor, and because of the bad reputation that Tor has, they can become suspicious of your online activities. Also, unlike a VPN, Tor is extremely slow due to its architecture.

If you wish to use Tor, do it safely alongside a no-logs VPN like Surfshark.

A Domain Name System (DNS) makes domain names, like Facebook, readable. Imagine if every time you wanted to go to Facebook, you’d have to type in a long sequence of numbers instead of a short, 8-letter name. You have to thank DNS for making it easier.

When you use Smart DNS or DNS changers (a.k.a. DNS resolvers), they change DNS servers on your device from local ones to DNS servers based in a different country.

If a website uses DNS level blocks to deny access to users in particular countries, then using Smart DNS or DNS changer will do the job.

However, there are many drawbacks of changing DNS for unblocking regionally restricted websites. It doesn’t change your IP address, it doesn’t encrypt your data, and it doesn’t unlock everything. Again, you’ll be better off using a VPN, since it offers much more functionality and security.

In 2018, when tackling the Digital Single Market, the EU also made it an obligation for paid content providers to offer the cross-border portability feature to the subscribers who are in the EU. The EU citizens now can take their local digital media to other EU countries trouble-free.

When it comes to streaming sites getting geo-restricted, it’s usually licensing and copyright deals; especially, in the US or the UK. In these cases, it’s legal to impose geo-blocking because the decision depends on copyright holders.

Although I’ve discussed the cases of how geo-blocking can be justified, the decision and power to choose should not be taken away from the user.

It’s fair to say that censorship cannot be justified. But restricting access to content due to short-sighted licensing deals is not a fair practice user-wise. People still pay subscription fees for streaming services, just like everyone else does. Copyright holders get their share of that, but since they’re focused on the highest earnings they can obtain, they want to be able to arrange different fees for different countries.

Surfshark does not encourage using a VPN in ways that would potentially violate Terms of Service of streaming service providers.

Bypass geo-blocking with a VPN

and get a 30-day money-back guarantee

How to get free Wi-Fi anywhere you go

How to hide your location using a VPN

How to set up a VPN connection on any device: A simple guide

Don’t miss out on this deal