Stream All 570 Hours of the Premier League from Anywhere

Your favorite team is 2:1 behind and you’re all caught up in the match. Suddenly – a buffering icon appears. You refresh the page, wait through a mandatory 30-second ad. You’re back, but when you check the score, it’s 2:2. A nightmare for every football fan!
Have you had enough of these frustrating streaming experiences? Then you need a VPN service. With a few easy VPN-assisted hacks, you can stream the Premier League from anywhere, safely and privately, without buffering or annoying ads.

Let’s take a look at how you can stream EPL games live from different countries first.

How to Live Stream Premier League in the UK

The broadcast rights for Premier League football matches in the UK are primarily operated by BT Sport and Sky Sports. Sky Sports provides the most coverage for the 2019/20 season with the rights to 128 games. BT Sport will be showing 52 games. A Sky Sports subscription lets you watch games on your PC, tablet or smartphone.

You also have the option of using Now TV, which provides Sky Sports passes, which are priced at £8.99 per day, £33.99 if you go the monthly route or £199 for the whole season.

You can use BTSport.com or the BT Sport app if you’d like to become a BT Sport subscriber and watch games on your PC or mobile devices.

Another option to view a few games is also available if you have a subscription to Amazon Prime. They’ll be showing 20 games during the 2019/20 season. For £7.99/month, you can use Surfshark VPN to subscribe to Prime and stream EPL while connected to our fast UK servers.

How to Live Stream Premier League in the USA

In the USA, NBC and Telemundo are the exclusive rights holders for EPL matches in English and Spanish languages. You’ll be able to choose from two different tiers, which can help cut costs if you’re on a budget or won’t have time to watch all the games.

The Matchday pass will air 140 games and is being priced at $39.99. The Premier League Pass is also available at $64.99 if you are interested in top-tier service. This allows you to access 380 live matches, which also includes on-demand replays, analysis and highlights.

Both services provide broadcasts that you can view using your smartphone, PC or tablet.

If you’re traveling, and want to access NBC or Telemundo, but they are blocked due to geo-restrictions, you can connect to Surfshark server network in the USA to enjoy every single game from anywhere.

How to Live Stream Premier League in Canada

The 2019/20 season saw some changes for EPL streaming with DAZN becoming the sole rights holder for showing matches. This broadcast network is going to show all 380 live games via their service. You can sign up for a one-month free trial, which is billed at $20 per month after the trial or go with an annual subscription, which costs $150.

The DAZN app can be used with IOS and Android tablets and phones. If you’re outside the country and want to use your DAZN subscription, connect to Surfshark servers in Canada to stream Premier League privately and securely from anywhere in the world.

How to Live Stream Premier League in Australia

Streaming EPL games from Australia can be done by signing up for a subscription with Optus Sport, which is a group of sports channels. The company has a contract with the Premier League, which allows them to stream all 380 games. You can watch them by using devices like your mobile phone, tablet or PC.

A monthly subscription to Optus Sport will set you back AUS$15 a month and is available by accessing the App Store or Google Play. After you have decided on your device or app, connect through Surfshark’s servers to stream from Australia.

How to Live Stream Premier League in India

Fans of EPL soccer who want to stream from India will want to utilize Star Sports via Select 1 or 2 channels. 250 games will be streamed for the 2019/20 season. If you’d like to access all 380 games, it requires you to sign up for a subscription with Hotstar, which costs INR365/month.

Similar to other providers, you’ll also have access to several other sportscasts such as swimming, boxing, golf and the Indian Premier League.

You can easily access Star Sports or the Hotstar app when you use our VPN service and a server located in India.

Although it is only available in India, you can access Hotstar with Surfshark. We don’t limit your bandwidth, and have a good server network in India, so you can stream without losing quality or speed.

If you’re a fan of the English Premier League that doesn’t live in one of the countries above, you still try to catch every game. However, streaming broadcasts of EPL games are often blocked and can’t be accessed if you’re located in another country. Also, streaming platforms are often loaded with ads and are pretty expensive. By utilizing a VPN service, you can go around this and make sure you never miss a game.

In short, a VPN masks your local IP address and makes it look like you’re in the same country where the broadcast is being streamed from. This means you won’t get blocked from watching a game if you’re trying to keep up with Liverpool, Chelsea or Manchester City. Also, it can help you avoid annoying ads and save money for streaming services. Let’s look at the ways a VPN makes your Premier League streaming life easier.

#1: Bypass Geo-Restrictions: When you use a VPN, you can choose to connect to a server located in popular countries such as the USA, Canada or UK. This comes in handy if you’re traveling abroad and your current location is Singapore or Germany.

If you’re being barred from viewing a streaming game, your VPN will bypass this geo-restriction. You can access any type of restricted content this way.

#2: No Logs and Zero ISP Snooping: When you’re connected to a VPN, all of your data is protected by a military-grade encryption system that won’t allow your internet connection to get tracked or spied on by anyone, which includes your ISP.

Also, if you choose Surfshark VPN, you won’t have to worry about having your data logged as we have a strict no-logs policy, which keeps all of your activity private. It will never be sold to a third-party.

#3: Stream Premier League Ad-Free: Another advantage of Surfshark is the CleanWeb feature. You’ll be able to block intrusive ads, which is a great way to stop being annoyed when you are trying to enjoy your game. This free VPN ad blocker also keeps you safe from phishing and malware attempts.

#5: Stream without Throttling: Some ISPs will advertise a specific internet speed and then practice the method of “throttling” if they feel like you are using too much bandwidth. They will slow down or “throttle” the speed of your downloads, which can wreak havoc when you are trying to watch a game being streamed. It can result in buffering and spotty video play. Our VPN service will remedy that situation and provide a constant speed without major fluctuations.

#6: Watch on Unlimited Devices: There is a Surfshark app for all popular devices and operating systems, and unlike other VPN providers, we don’t limit the number of connections. This means you can stream Premier League games on any and all of your laptops, phones or tablets, at home or on the go. Added bonus: our local VPN servers close to the streaming source guarantee a speedy and buffer-free EPL experience.

As you can see, if you are traveling or living in a country where you don’t have access to the Premier League via a streaming service, Surfshark eliminates the problem and allows you to easily access your favorite streaming plan.

If you want to enjoy all of the above VPN benefits and stream Premier League hassle-free, get Surfshark 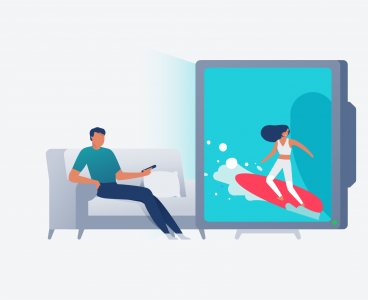