VPN (Virtual Private Network) protocols are to a VPN what morals are to society – rules ensuring the entire process’s function, safety, and stability. There is a wide variety of current and outdated VPN protocols,  and we’ll take you through how they compare and which ones are best for every situation.

What is a VPN protocol?

A VPN protocol is a set of rules for creating or participating in a Virtual Private Network (VPN). It determines the authorization, authentication, encryption, traffic capturing, and transportation methods under which your VPN client establishes your connection to a VPN server.

What a VPN protocol is not

Let’s bust some widespread VPN myths to kick us off:

VPN protocols determine your connection speed: yes, but not directly. This statement is only partially true.

VPN protocols determine the security of your connection: they don’t. The encryption algorithms they use do.

You may wonder, what makes VPN protocols important, then?

It is possible to develop and use your own protocols, but it would mostly be a waste of time and resources. Most VPN providers use open-source protocols built to support multiple operating systems, audited and trusted by the cybersecurity community.

A deep dive into the different VPN security protocols

If you’re already using a VPN, you may have selected a protocol and forgotten about it. Since it works fine, why would you need to know about the others? Let’s hear from the experts at NetBlocks:

“The underlying protocol a VPN uses affects latency, performance, and reliability of the encrypted tunnel. Tracking connectivity around the world we see that not all protocols are equal, so consumers should get familiar with the options,” says Alp Toker, Founder & Director of independent internet monitoring organization NetBlocks.

So here’s a closer look at what makes certain VPN protocols shine:

Verdict: Recommended in most situations.

OpenVPN is an open-source VPN system that comes both as software and a protocol for VPN services. Its encryption and verification processes are based  on the TLS (Transport Layer Security) methodologies.

It is usually paired with the very secure AES-256-GCM encryption algorithm. The open-source nature of this protocol has made it possible for specialists worldwide to check it for security gaps and other issues.

The downside is that it can be hard to set up, but if you’re using a VPN service (like Surfshark), that doesn’t matter to you.

Verdict: Recommended in most situations.

Internet Key Exchange version 2 (IKEv2) is the authentication protocol used with the IPSec VPN protocol. As IPSec (Internet Protocol Security) partly runs in the background on the system’s kernel, it allows IKEv2 to be very fast.

IKEv2 is implemented on most operating systems, so you can easily use it instead of the slower OpenVPN. While it uses the same grand security tools as OpenVPN, IKEv2 is much easier to scale and maintain on a server level.

Verdict: Highly recommended in most cases.

WireGuard is a spunky protocol that delivers a connection speed faster than IKEv2 and OpenVPN yet only uses 4,000 lines of code (OpenVPN clocks in at around 400,000). Its lightweight code allows easier auditing and, in theory, improves its stability.

While it doesn’t have years of experience (and testing) like OpenVPN, WireGuard offers top-tier security and encryption standards at an unmatched speed due to its simplicity. Implemented on Linux and Android, it seems to be here to stay.

*WireGuard is a registered trademark of Jason A. Donenfeld.

It is faster than OpenVPN and can use the same security tools. However, it hasn’t been around that long, so it’s not as tested as OpenVPN.

Verdict: Not recommended. Ever.

Point-to-Point Tunneling Protocol (PPTP) is an old and obsolete tunneling protocol that no VPN service should ever use. It only supports encryption ciphers up to 128 bits and has several known exploits revealed by the US government and the NSA (National Security Agency).

As internet security and privacy advocates, we cannot recommend PPTP under any circumstances.

Verdict: Secure-ish but not recommended.

Secure Socket Tunneling Protocol (SSTP) is a tunneling protocol that can send PPP (Point-to-Point Protocol) traffic. SSTP can run over port 443, which is often left open in many firewalls allowing the user to bypass them.

However, SSTP’s downfalls are twofold: there’s a lack of compatibility with other operating systems besides Windows, and its code remains unaudited, raising concerns that it might have in-built backdoors.

Layer 2 Tunneling Protocol (L2TP) is a tunneling protocol that does not provide security on its own and uses IPSec for encryption.  L2TP encapsulates data twice, which slows down the connection speed. Also, L2TP, as rumored by John Gilmore, one of the founders of the EFF (Electronic Frontier Foundation), has been deliberately made less secure during its development stages.

Shadowsocks is a tunnel proxy based on SOCKS5, and while it can run through a VPN application, it is not a VPN protocol.

It’s an open-source project that was specifically designed to bypass the Great Firewall of China.  However, it’s not the most graceful protocol to implement and run. For our Chinese users, our NoBorders mode should help meet that need.

What is the best VPN security protocol? 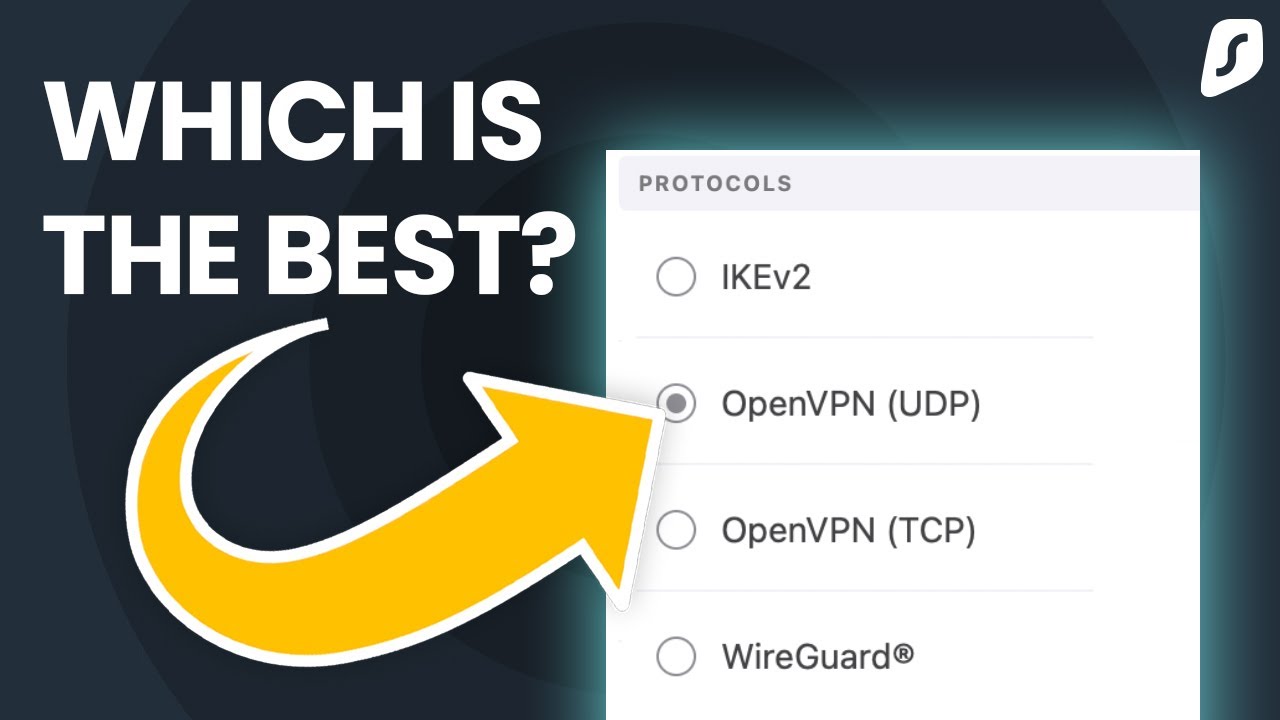 Is there such a thing as the best VPN protocol at all?

Truthfully, “best” is a strong word, and it’s impossible to pick one protocol that’s the best for every situation. The two protocols that form today’s crème de la crème are WireGuard and IKEv2/IPSec.

OpenVPN is a close third as, on paper, it delivers the same results but is more difficult to work with. However, many routers are made OpenVPN-compatible, and it’s handy if you want to set up a VPN on your home network!

There’s also a bit that depends on the circumstances. A protocol that’s great for one thing might be bad for another. So what are the main things you might want to know?

Now look at this handy table:

As you see, most protocols are fairly similar. Surfshark employs WireGuard, IKEv2, and OpenVPN to give you a trustworthy alternative depending on your needs. By that metric, you could say that we consider these protocols to be the best in the world *wink*.

The 3 most secure VPN protocols

Just like with the “best” category, there’s no such thing as “the most secure” VPN protocol. WireGuard, IKEv2, and OpenVPN all achieve about equal levels of security – and they’re really secure.

But even with secure protocols, it’s how a provider builds and configures their VPN network that matters the most – you probably shouldn’t trust a free VPN even if it runs WireGuard!

Which VPN protocol is the fastest?

Contrary to popular belief, VPN protocols themselves don’t have a dramatic impact on your connection speed. Here’s what really matters:

Most of our tests and user feedback show that the connection speed competition comes down to the wire between WireGuard and IKEv2 (pun fully intended).

Which VPN protocol is the most stable?

OpenVPN TCP (Transmission Control Protocol) tends to be the most stable protocol, especially when dealing with unreliable networks. Still, that comes at the price of speed as to relay every bit of information, TCP takes a bit longer than, say, UDP (User Datagram Protocol).

OpenVPN TCP vs. UDP: what is that?

TCP and UDP are essentially different transport layer protocols that OpenVPN can use to establish a VPN connection.

TCP ensures a stable connection by making sure all data packets arrive in order. UDP does it faster by throwing everything at you and then arranging them to work.

While UDP works best for most users, the general advice is to try them both out and use the one that provides you with a smoother connection.

Why WireGuard, OpenVPN, and IKEv2 are the best VPN protocols

Most older protocols outside of WireGuard, OpenVPN, and IKEv2 are outdated full of vulnerabilities, and obsolete. There is no real reason to use any other VPN protocols outside The Big Three. In truth, one protocol would be enough to provide a good VPN service, but due to the differences in compatibility for routers and different OS (operating systems), we provide all three.

You now know everything about VPN protocols a VPN user might need. The most important thing is to pick one that best suits your needs. We recommend using WireGuard or IKEv2 for general use and OpenVPN if you need to set up a VPN on your router. Incidentally, Surfshark offers all three!

Put this theory to practice
Get Surfshark

Is IKEv2 faster than OpenVPN?

In general, yes. The speeds of protocols often depend on your network. So it’s not an exact science, but many people report that IKEv2 works faster for them compared to OpenVPN.

What protocol should I use for a VPN?

Most VPNs will decide this for you as they set their apps to apply the protocol best suited for your connection automatically. Still, as it’s not an exact science, it’s always best to test them yourself.

What type of VPN is best?

The best VPN is a reliable, no-logs service with the resources to keep up with the newest security innovations.

What is the latest VPN protocol?

Is UDP good for a VPN?

Yes. UDP is one of the best protocols for a VPN as it’s stable, reliable, and offers good speeds.

What is a VPN tunnel?

What’s the difference between symmetric and asymmetric encryption?

What is VPN encryption and how does it work?