Online ads are designed to make money. But internet users hate them so much that many would rather pay money for an ad blocker or an ad-free service than for the products being advertised.

In place of old-school charm and inventiveness, today’s internet advertisers are powered by your data. It should make the ads you see more relevant and welcome. Instead, it just makes them annoying, or even reputation-damaging. Just ask the British MP who publicly called out a rival party for advertising a niche dating service on its site, only to find out the ad was personalized to him.

But how about internet users in other parts of the world? Surfshark wondered whether users’ hatred for online ads is universal (it isn’t) and where in the world the desire for effective ad-blocking is most strong. So, we analyzed every country’s search volume data for the top ad-blocking software and balanced the figure against the population of internet users to see who hates ads the most.

Internet advertising… it’s just not very French, is it? “For a very long time, French intellectuals associated advertising with something destructive to culture, going back to Voltaire and beyond,” clarifies Caroline Marti, a media sciences professor at the Sorbonne. Or, as a French anti-ad campaigner puts it: “advertising breaks your spirit, confuses you about what you really need, and distracts you from real problems.”

France is the place with the biggest search volume for ad-blocking software, by a considerable margin. Surfshark found 579 searches per 100,000 French internet users, compared to 510 for second-placed Sweden. Nine of the 10 countries that hate ads the most are in Europe – the other place is Canada, with 394 searches per 100k.

Canada is the North American country that is (by far) the most allergic to online ads, with 94 more searches per 100k than second-placed US (300/100k). A recent survey suggested that 44% of Canadians will put up with ads if they get something for free in return. However, 43% said they found online ads annoying.

The US and Canada are way out ahead of the rest for ad-blocking. Third-placed Saint Vincent and the Grenadines gets just 194 monthly searches per 100k, and the next highest is Mexico with 138.

Argentina’s 33,561,876 internet users make 89,705 searches for ad-blocking software each month. That’s 267 per 100k, making Argentina the most ad-allergic country in South America. Consumers in Argentina are known for a lack of brand loyalty, meaning advertisers have a lot to play for. However, given our statistics, it seems online advertisers may be over-egging it.

Brazil doesn’t seem to mind so much. Brazilian advertisers direct 60% of their ad budget to web ads, which is 10% more than in the US. Still, only there are only 157 monthly searches for ad-blocking software per 100k internet users in Brazil.

Scandinavia doesn’t like ads. Not only is Sweden the second hate-iest European country in our study, but Denmark, Norway, and Finland are also in the top 10. Sweden has a rare celebrity director in the world of advertising: Cannes-winning Roy Andersson’s name has become a byword for inventive commercials. However, Andersson’s TV ads seem to come from a quieter age, now.

The UK is mid-way down the league table of ad haters, with 266 searches per 100k people. Internet advertising is the only area of UK marketing budgets to record positive growth in recent times. Whether this is connected with the mysterious viral 'butt-less' pyjama ad that caught the nation’s attention in this period is unknown.

Turkey leads the search for decent ad-blocking software in this region, with 311 searches per 100k users, compared to second-placed Israel’s 287/100k. There is a relatively small but fast-growing ecommerce market in Turkey, with a significant part of the population still new to online life. Internet shopping has yet to gain traction, with just one-third of Turkish internet-users buying online.

The Israeli disdain for online ads is apparently due to a low tolerance for sales talk. However, the insensitive use of social stereotypes may also be causing Israeli internet users to switch off.

The web-going populations of Australia and New Zealand have very little time for online ads. Both nations are among the top 20 ad-hating countries in the world. Google and Facebook account for 80% of Australia’s online advertising spend. This advertising duopoly is at the heart of a controversial move to force the companies to pay for sharing Australian publishers’ content.

Fiji is one of the most ad-tolerant countries in our study. The population of 452,479 users makes just 110 individual searches for ad blockers per month – that’s 24 per 100k.

Three countries stand out as Africa’s big ad-haters: Morocco, Algeria, and Tunisia each make a little over 200 searches per 100k users per month for ad block software. Tunisia and Morocco are both among Africa’s biggest internet users, with Morocco enjoying a particular boom in online activity over the past half-decade.

Nigeria is the least hatey country in our study, with just one search per 100k users. And there are relatively few searches for ad blockers across Africa compared to other regions. However, internet adoption and online marketing are booming across the continent, and a change in attitudes towards internet advertising could be on the cards.

The Dangers of Online Ads

Thinking about investing in some ad-blocking software? Chances are your main motivation is to rid your screen of annoying distractions. But online advertising has more serious implications. Targeted advertising compromises your privacy. Attention-grabbing pop-ups eat up your data allowance. So-called ‘malvertising’ can infect your device with malware. Online ads can cost you much more than the price of the occasional impulse-buy. If you want to take care of your online privacy, block ads and malware, a VPN with an ad-blocking feature is a good way to start.

Wondering where your home country features in the table of international ad-haters? Take a look through our table below for a closer look at the complete data from our study.

To embed please copy and paste the code below. 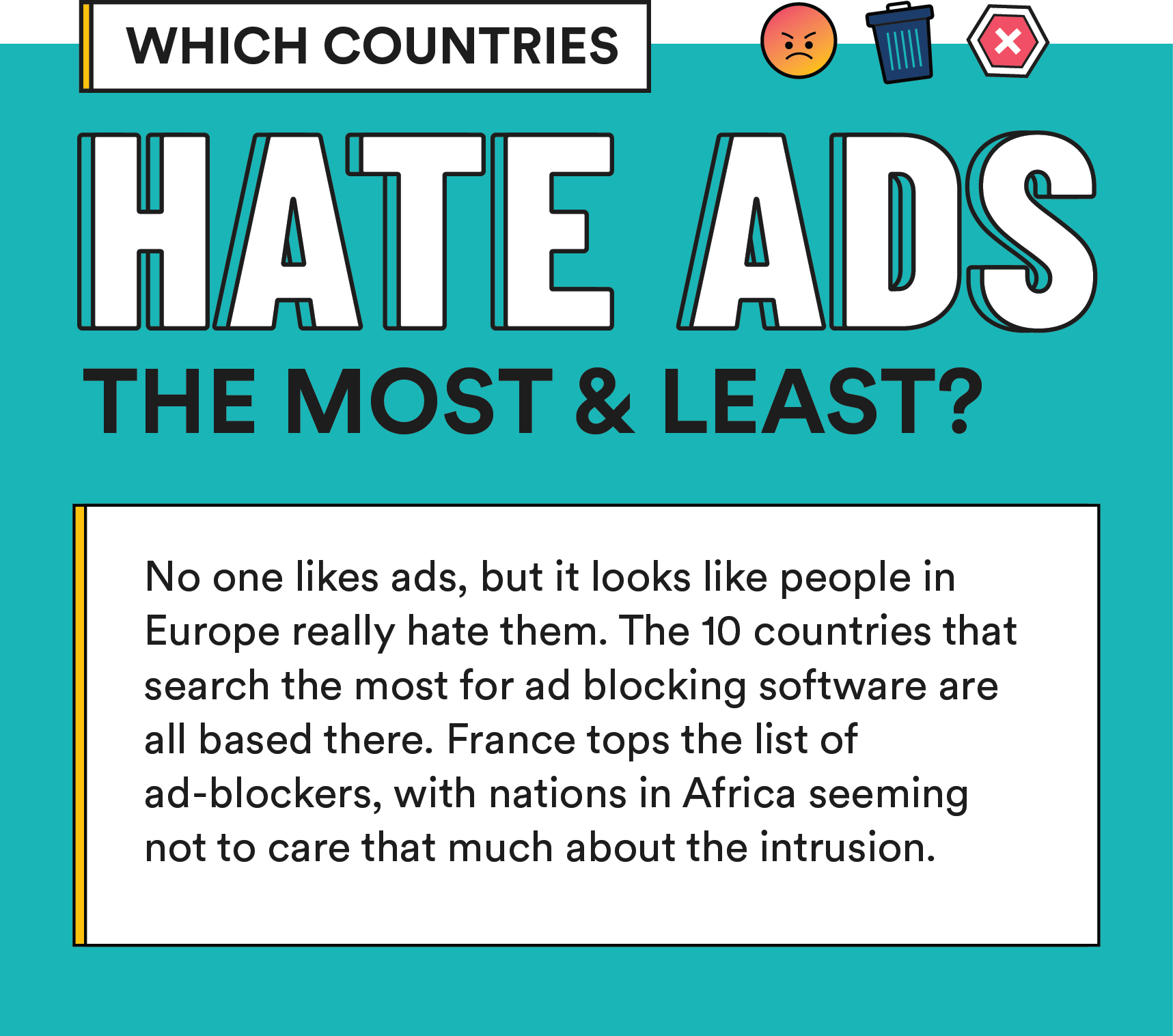 To get an ever wider perspective, we also compiled the figures into continents. Check out this table to see which landmasses are dead against ads, and which ones don’t seem to be too bothered.

To embed please copy and paste the code below. 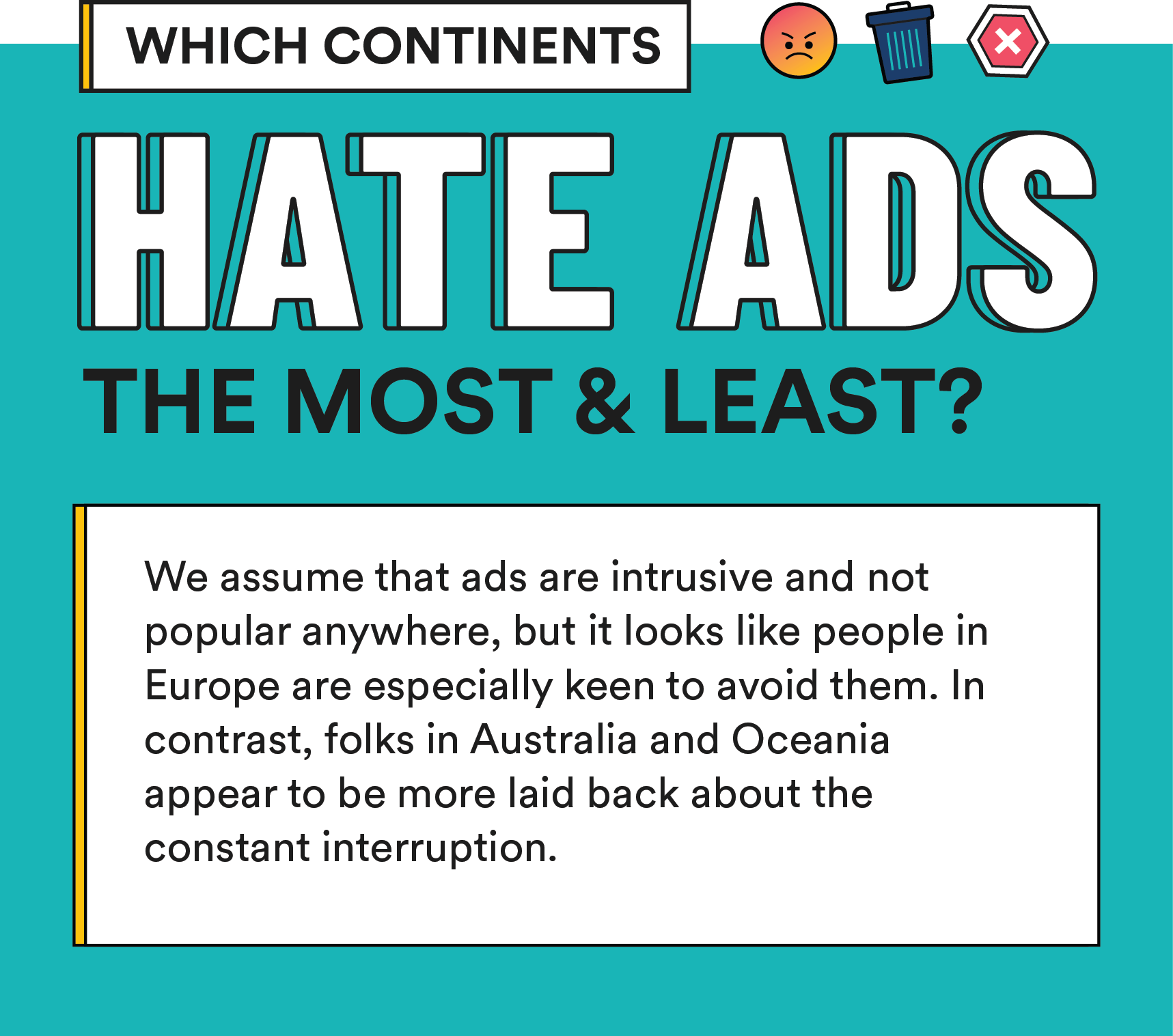 We compiled a comprehensive list of ad-blocking software using authoritative sources, including TomsGuide, Mozilla, and DigitalTrends. Then we used Ahrefs to find out which countries regularly search for them on Google the most. Then we took the number of internet users in each country from the Telecommunication Union, divided the number of monthly Google searches by the number of internet users, and multiplied by 100,000 in order to make the results more readable.