A global research on the quality of a digital wellbeing in 85 countries (81% of the global population). This study indexes the countries by looking at five fundamental pillars that define the digital quality of life.

An interactive comparison tool, country reports, and full research material in only available on desktop browsers.

Compare the Digital Quality of Life in 85 countries

Global rank out of 85

Key insights from the DQL index 2020

The Digital Quality of Life Index has revealed insights on what tangible factors have the greatest impact on the country’s digital wellbeing, and which areas should be prioritized in improving its potential.

Top countries with the
highest Digital Quality of Life

Scandinavian countries excel in offering high quality digital wellbeing to their citizens. At the same time, 7 out of 10 countries with the highest DQL are in Europe, reflecting strong development across the majority of aspects that influence quality of people’s lives there.

Leaders in each of the five pillars

Standing out from the crowd

Although GDP per capita has a strong correlation with the DQL, there are countries that have better digital quality of life with lower GDP per capita than expected.

E-security, e-infrastructure, and e-government have a more significant correlation with the DQL than GDP per capita. This proves the potential to level up the digital wellbeing with lower resources and more focused strategic planning.

3 countries in the Middle East (Bahrain, Kuwait, Saudi Arabia) with relatively high GDP per capita are underperforming in providing better digital wellbeing for their citizens due to low levels of internet quality and e-security.

The affordability of the internet plays a major role in ensuring accessibility, but has a notably lower correlation with the DQL than the other pillars. For instance, the internet is less affordable in some Southern or Eastern European countries, but people there still enjoy higher than average digital quality of life. Interestingly, the affordability does not depend neither on the quality of the connectivity, nor the level of e-infrastructure development.

No one is perfect

All countries at the top have space for improvement.

COVID-19 impact on the internet quality

The stability of the internet infrastructure has become of crucial importance during the Covid-19 crisis, when video conferences replaced live meetings. Consequently, it impacted the quality of people’s digital lives.

During the first month of the lockdown, 49 of 85 countries experienced deteriorated speeds of mobile internet, and 44 of broadband connection. 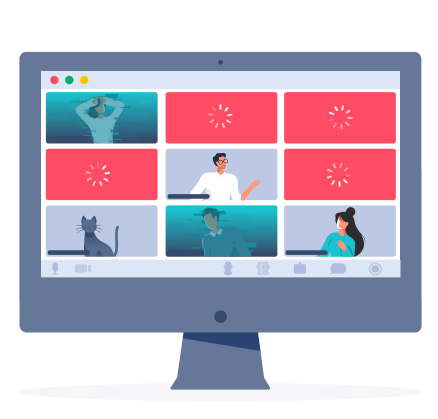 Your country can only protect you as far

E-security is important to our livelihood, but social systems can only protect us to a limited degree. It takes individuals to form a collective, and it’s up to each of us to look after ourselves on the internet. Online privacy tools like VPNs allow you to hide your digital footprint with a click of a button. Paired with good browsing practice, they can help avoid digital threats and unwanted data collection. And the best thing about it? You can try a VPN for free.

The 2020 edition of the Digital Quality of Life Index is a second, improved iteration of Surfshark’s previous research. This year, the DQL Index is statistically more complex, analytically vigorous, and includes 12 different factors that directly influence the digital quality of life in any given country. Because of several improvements to last year’s methodology, the DQL Index editions are not comparable.

The DQL Index 2020 analyzes 85 countries (as compared to 65 in 2019) around the world in terms of five core pillars: internet affordability, internet quality, e-infrastructure, e-security, and e-government. Underpinning these pillars are 12 indicators that are interrelated and work together to provide a measure of overall digital quality of life. The indicators are given equal weights within their pillar.

The affordability of the internet connection is one of the most important factors indicating the accessibility of the internet to the people living in any country, and consequently defining the initial experience. Considerably, a less affordable internet (mobile and broadband) has a negative effect on digital wellbeing and vice versa.

Indicator 1: Time of work to afford the cheapest mobile internet (seconds) (50% weight within the pillar)

The factor value of the affordability of mobile connectivity was determined by dividing the price of the cheapest 1 GB mobile data package by the average hourly wage in a specific country. Then, the index value was derived by dividing the value of the cheapest mobile data package globally by the factor value and multiplying by 0.5 to weight it in the internet affordability pillar that consists of two indicators.

The factor value of the affordability of broadband connectivity was determined by dividing the price of the cheapest broadband internet package by the average hourly wage in a specific country. Then, the index value was derived by dividing the value of the cheapest broadband package globally by the factor value and multiplying by 0.5 to weight it in the internet affordability pillar that consists of two indicators.

The quality of the internet connectivity is a new, enhanced, and more inclusive pillar in the DQL Index 2020 if compared to a 2019 edition. It includes four indicators of equal value (0.25), namely, the speeds of mobile and broadband internet, as well as their respective stability. The stability indicators were included in relation to the global COVID-19 pandemic, when people around the world were forced to move to work from home. All four of the indicators are considered to directly and critically influence the digital experience.

To index the speed of mobile internet around the world the 9-month average of the mean monthly download speed in any specific country in 2019 was divided by the highest average download speed value globally, and weighted by 0.25.

To index the speed of broadband internet around the world the mean download speed measured across a 12-month period in 2019 was divided by the highest average download speed value globally, and weighted by 0.25.

Stability of mobile internet connectivity was determined by comparing the change in download speed before and after most of the countries in the world announced lockdowns due to COVID-19 pandemic. The percentile change in mobile download speed in the second week of April, 2020 was compared to the week of March 2, 2020 for all countries except China, which was compared to the week of January 6, 2020. If the change was positive or equal to zero, countries were considered to have a stable internet connectivity and were assigned a value of 1.0000. If the change was negative, the percentage difference was deducted from the max value of 1.0000. Then, the stability factor value was weighted by 0.25.

Stability of broadband internet connectivity was determined in the same way as for mobile internet stability.

Having a highly functional and well-developed electronic infrastructure enables people to use the internet more in their daily lives for a multitude of purposes, such as studying, e-commerce, entertainment, banking, and other. This strongly amounts to having a better digital experience. The pillar of electronic infrastructure includes two equally weighted indicators that help to evaluate the advancement of it.

A country's commitment to and the capabilities of its national cybersecurity are critical to the overall well-being of its citizens and economic growth. Strong electronic security grows in importance as the number of cases and the scope of cybercrime rises, consequently affecting the digital experience of every country’s citizens.

To account for cybersecurity in each of the researched countries, the Global Cybersecurity Index (GCI), developed by the International Telecommunications Union (ITU), was used for its viability and the extent of data inclusivity. Since the ITU postponed the publishing of the 2019 edition of its GCI index due to COVID-19 pandemic, the data for this indicator is from 2018. The GCI index was weighted by 0.5 as there are two indicators combining the pillar of electronic security.

The advancement of electronic government services highly influences people’s digital lives as it can provide better service delivery at reduced costs, and has the potential to increase overall efficiency. E-government also helps to minimize the bureaucracy, reduce corruption and increase transparency of the public sector. This pillar consists of two equally weighted indicators that help to define the existing situation of e-government in any given country.

To determine e-government availability, the United Nations’ Online Service Index (OSI) was used for its inclusivity. The OSI is a composite part of the UN’s E-Government Development Index (EGDI). The OSI is based on the extent of a country’s government’s online presence. To weight up the OSI index, it was multiplied by a weight factor of 0.5.

The AI readiness indicator is a new factor in the DQL 2020 Index, included to exhibit the capacity of a specific country to avail the potential to become more efficient by using artificial intelligence technology. The indicator was created using the Government Artificial Intelligence Readiness Index 2019 developed by Oxford Insights and the International Development Research Centre. The index was normalized to fit the DQL index logic by dividing a country’s AI index score by the highest AI index score globally, and weighing it by 0.5.